“My husband Andrew was in Iraq for about eight months….He now has severe back problems [and] was also diagnosed with neuropathy which causes him to have no feeling in his legs and it makes his legs weak….he has fallen on several occasions out of the shower. 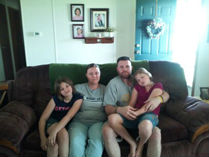 The last fall was a big one…. we did not know where to turn. [His] Wounded Warrior Case manager told us it would be very hard to get a grant from the VA [but] would make a few phone calls and get back to us.

A couple of hours later Andrew called to tell me that a man named Paul with Renovating Hope is going to redo our bathroom. I sat in my car and cried tears of joys and thanking God for an organization that cares….Besides our bathroom Renovating Hope also gave us a new back door….To say thank you does not feel like enough for what Renovating Hope has done for us.

Thank you doesn’t even come close to the gratitude our family feels. We just know that Renovating Hope is an amazing organization and we will be forever grateful for what they have done for us.”

“They are not asking for a hand out. I am. He is a proud man that needs help. He is a veteran, disabled, and has worked his whole lifeI remember when he was told that you would be helping, his excitement and gratitude was overwhelming. Your help came at a time when he felt defeated. You have given him so much more than a new roof. You have given him hope.”

IN RECOGNITION OF RENOVATING HOPE

HON. TOM REED of new york in the house of representatives

I recently had the privilege of observing Renovating Hope's service and commitment to our military heroes in my district. The organization developed a project to remodel the home of Retired Army Sgt. Robert C. Costley, a Purple Heart Award recipient who was critically wounded by a roadside bomb during his tour in Iraq. The renovation of Sgt. Costley's home in Erin, New York, would not have been completed without the leadership of Renovating Hope and the hard work of countless volunteers
from the community.

I am proud to recognize the efforts of Renovating Hope in assisting our military heroes, and I commend their dedication to giving back to the individuals who have given so much of themselves to serve this great country. This organization truly exemplifies the commitment to serving the men and women of the United States military. As Americans we should strive to emulate this commitment every day.

We use cookies on our website to give you the most relevant experience by remembering your preferences and repeat visits. By clicking “Accept”, you consent to the use of ALL the cookies.
Do not sell my personal information.
Cookie SettingsAccept
Manage consent

This website uses cookies to improve your experience while you navigate through the website. Out of these, the cookies that are categorized as necessary are stored on your browser as they are essential for the working of basic functionalities of the website. We also use third-party cookies that help us analyze and understand how you use this website. These cookies will be stored in your browser only with your consent. You also have the option to opt-out of these cookies. But opting out of some of these cookies may affect your browsing experience.
Necessary Always Enabled
Necessary cookies are absolutely essential for the website to function properly. These cookies ensure basic functionalities and security features of the website, anonymously.
Functional
Functional cookies help to perform certain functionalities like sharing the content of the website on social media platforms, collect feedbacks, and other third-party features.
Performance
Performance cookies are used to understand and analyze the key performance indexes of the website which helps in delivering a better user experience for the visitors.
Analytics
Analytical cookies are used to understand how visitors interact with the website. These cookies help provide information on metrics the number of visitors, bounce rate, traffic source, etc.
Advertisement
Advertisement cookies are used to provide visitors with relevant ads and marketing campaigns. These cookies track visitors across websites and collect information to provide customized ads.
Others
Other uncategorized cookies are those that are being analyzed and have not been classified into a category as yet.
SAVE & ACCEPT